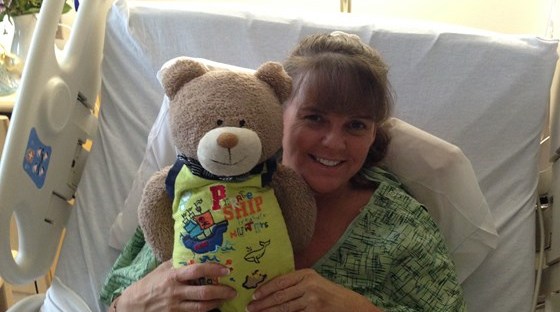 She awoke that Saturday morning with a nagging stomach ache on the side. Having put on the Mother’s Day Fashion Show at school the day before and with three students home with the flu, Kristyn Fletcher assumed it was either a bad cold or the aftermath of a busy week. Refusing to give into what she believed to be a bug, Kristyn continued her Saturday plans by planting in the garden with her husband, Scott. “It wasn’t until I went to Walmart that it really started bothering me,” she recalls, “I thought, maybe I should pick up tums instead of flowers.” Upon returning home, she decided to make a trip to urgent care, letting Scott know that she would meet up with him at their son’s soccer game afterwards. But, Kristyn never made it to the soccer game.

After urgent care suspected she may have appendicitis, Kristyn was sent to the hospital for x-rays, where they found “activity in [her] colon that looked suspicious.” It was the day before Mother’s Day and instead of celebrating with her husband and four kids at home, she was strapped to a hospital bed, undergoing test after test, waiting for doctors to locate the source of the issues. “We see tumors,” the doctor relayed to her and Scott. “That night when we were sitting there, I knew he was talking about me, but it felt as if he was talking about somebody else.” What started off as a quick trip to urgent care, ended up being a 13-day stay at Mission Hospital in Mission Viejo. It began with removing two tumors from Kristyn’s colon, including two feet of her colon. Maybe it’s colon cancer they thought. But, when they went to remove her appendix, they found another tumor hidden away. It seemed like it was never ending. While removing one tumor, there was always a new one awaiting to be discovered. By the time Kristyn was leaving her 13-day stay, 8 of her lymph nodes had been removed and doctors had a clear idea of what they were dealing with: Stage IV Metastatic Signet Ring Cell Carcinoma. In simpler terms, Kristyn had a rare form of appendix cancer. A cancer that was possibly treatable for a time, but ultimately incurable.

Growing up with a mom as a Preschool Director, Kristyn and her siblings inherited a passion for teaching. “I just always loved being around kids,” she remembers, “I was always eager to go with my mom and help her at the preschool whenever there was an opportunity.” What began as a summer job when she was twelve at her mom’s preschool, slowly progressed into a career. After going to school and working full-time, Kristyn earned her teaching credential and was offered a position as a Kindergarten teacher at Cordillera Elementary School in Mission Viejo in the fall of 1994. “I love the kids, I love the age,” she exclaims when talking about her kindergarten students. “They come in wide-eyed, not knowing what to expect and then ten months later, they’re completely different – confident and ready to take on the world!” With four kids of her own ranging from 13 to 26, teaching has never been just a job for Kristyn, but rather a commitment she takes seriously to both her students and their parents. “I treat every child in my class as if they’re my own. What kind of teacher would I want for my kids? I want my kids to be silly and have fun, but most of all, learn.” After teaching all these years, it’s rare Kristyn doesn’t know a parent or kid at Cordillera Elementary. “I don’t know if it’s unique but we have great families at our school. For some of them, I’ve had three or four of their kids in my class. You really get a chance to build relationships and genuine friendships with these parents.” Unbeknownst to Kristyn, after teaching in the same classroom for twenty years, May 9th, 2014 would be her last official day at Cordillera Elementary.

“I was devastated enough when I thought I’d have to miss two weeks because of my appendix” she recalls. Starting chemo in June, there wasn’t a likely chance Kristyn would be heading back into the classroom till end of December of 2014, which was delayed again when they found a tumor had grown on her left side. “If my blood count was fine, I was able to go into the classroom and help my substitute teacher. It was quite therapeutic for me. I got to spend time with the kids, catch up with my friends at the school, and even visit with the parents. A little sense of normalcy in this chaotic world I was suddenly thrown into.”

It was a call she received on January 15th, 2015 that would flip Kristyn’s already chaotic world into a nightmare. “I need to get you in here next week, we made a mistake. We thought your differential pay was over on March 3rd, but it’s actually ending on February 6th,” a representative from the school district said to Kristyn over the phone. That next Wednesday, Kristyn made a visit to the school district. “She wasn’t even seated, just rifling through papers on her desk while telling me ‘I just need to make sure that you know March 3, 2015 will mark your termination with the school district. You’re out of sick time and deferential pay,’” Kristyn recalls. As the representative told her she could either go on unpaid leave or disability retirement, both options void of health insurance, Kristyn sat in disbelief, unable to move. “I had to go to San Diego the next morning for surgery and all I could keep hearing was ‘no benefits, no benefits, no benefits.’” Unaware this situation could even occur, especially when she had purchased disability insurance with the understanding that it would cover her in this type of situation, Kristyn inquired about asking her colleagues to donate days from their vacation and sick time. With Kristyn having donated her sick and vacation time on multiple occasions, she knew it was a plausible option. With the district’s approval, Kristyn reached out to her teachers in the school district and within two days, she had accumulated 60 days, allowing her to keep her benefits and buy her time while she worked out what she was going to do next.

Kristyn reached out to the Union to discuss her options. “I thought if I retired, I could keep my benefits, which is all I really wanted. However, I was told there were no provisions in the contract for disabled retirees and to retire, I had to at least be 50. It just felt like they were saying, ‘thanks for your 20 years of service, but we’re taking away your health insurance. Sorry, that’s the way it is.’” Whereas Kristyn had the option of going on Cobra, the $2,000 monthly bill was no option for her family’s budget. “My doctors were outraged. They said they’d never had a patient where their employer terminated their benefits, especially during medical treatments.”

With outcries coming from family, friends, co-workers, parents, and even the media, Kristyn’s brother Ryan, a Principal for Violet Elementary in Garden Grove, approached the School District, urging them to revisit the wording in the teacher’s contract about “disability retirement,” and implement revisions regarding medical coverage for individuals who are truly unable to work. Since a current contract had not been signed, it was believed to be the perfect opportunity to take a closer look and make some changes. After much deliberation, the district refused to revise the contract but instead allowed teachers the opportunity of donating 124 more sick days to Kristyn. “This is a good starting point, but it shouldn’t be up to the teachers to sacrifice their sick and vacation time,” Kristyn states. “I’m forever grateful for my fellow teachers, more than they will ever know, but it’s not their responsibility. I hate that this falls back on them, especially since they’ve already done so much for me. The union and the school district need to take a look at the situation and ask themselves, ‘what if this was my wife, mom, or daughter?’”

A journey she never wanted to be on, Kristyn is taking one day at a time, focusing on her family and striving to make a change so that no other teacher has to experience what she’s been going through. “I don’t want any special treatment. I just would like the retirement benefits I’ve been paying into for the past twenty years.” With an army comprised of family, friends, co-workers, parents, and former students, Kristyn is urging the school board to reexamine teacher’s contracts with focus on disability retirement. “No one should have to figure out how they’re going to take care of themselves while they’re sick.” Regardless of Kristyn’s diagnoses, she’s determined not to let anyone put a time stamp on her life. Instead, she’s focused on her husband and kids, working to create as many memories with them as possible. “It’s hard when you have kids. Will I ever see my youngest two graduate from high school? Probably not. Probably won’t see my four children get married either.” Despite being in-between surgeries and in the midst of chemo, Kristyn’s witty humor and charming personality have yet to disappear. With a new teacher’s contract waiting to be approved, Kristyn’s termination date currently stands as May 12th, 2015 unless the contract is signed and the 124 days are donated by the teachers. “This has been a hard year for me and my family. Whereas I always believe things happen for a reason, I’m still figuring this one out. For some reason, I was the chosen one.”

Update 5.5.2015 – Whereas the school board signed the new teacher’s contract, they neglected to revisit the wording “disability retirement” in the contract, as pleaded to them back in March. With 41 more school days (out of the allowed 124 days) donated to Kristyn by her fellow teachers, she’s hoping she’ll receive enough days to take her into late fall when her next surgery is scheduled. “I’m not sure that’s going to happen,” Kristyn states, “and like I’ve said a hundred times, it’s not the teachers’ responsibility to take care of me.  It is however, crucial I have my insurance benefits at that time.” The fight is not over yet.

Update 8.29.2015 – It is with great sadness to share that Kristyn lost her battle with cancer on August 29, 2015 leaving behind her husband, four kids, and a community full of friends and family who loved her more than a words can accurately capture. Kristyn you may not be here with us on earth anymore but you will never be forgotten. May your selflessness, humor, and determination to keep moving forward live on through those you’ve inspired.