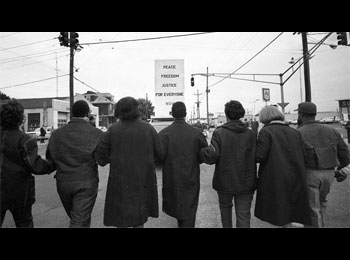 A few years ago (2009-2012), I was freelancing for the publication By U Magazine, based out of Mississippi.  It was an incredible experience as I had the opportunity to speak with and get to know a wide selection of honorable individuals who I otherwise would have never come across.  One interview that will forever stay with me is with Helen Ingram.  Days after Martin Luther King Jr. was shot and killed, 16 year-old Helen Ingram participated in “The Poor People’s March” and helped pave the way for Civil Rights.  Here is her story…

It was 1968 and Helen Ingram was 16 years old.  Dr. King had been assassinated weeks prior to the event.  Several prominent leaders in the Civil Rights Movement had visited Marks, Mississippi and encouraged the Delta residents to move forward with the march, which was part of “The Poor People’s Campaign.”  This march would demonstrate to the government the need for jobs, healthcare and homes that so many Delta residents lacked.  “Kids didn’t eat lunch because they’re parents couldn’t afford it.  So teachers were giving their lunches to the kids, leaving them without food.”  Ingram grew up attending the Civil Rights meetings.  She knew without a doubt that wherever the campaign took place, she would be there fighting for her rights.

That day Ingram went to school with the plan of participating in the walk-out.  It was in class she and her classmates heard about the arrest of several Civil Rights leaders.  Plans altered: now, they would be marching to the jail instead of heading to the local church.  In a crowd of 400 students, Ingram walks amongst her classmates.  They approach the jail, Civil Rights leaders “ hollering out the windows for the kids to sit on the grass and cover their heads.”  Guards surround the jail, eager to attack.  “You better leave,” a family friend warns Ingram.  She ignores him.  Told from a young age she had a big mouth, Ingram was done with the segregation and lack of respect.  No more eating behind the kitchen at a restaurant.  No more friends dropping out of school to work in the cotton fields.  And for goodness sakes, no more outhouses!  “My children will never go through this,” she says to herself, resisting intimidation.  Forward, come the guards.  Left, right, left, right and bam!  They start beating the kids.  Ingram’s “kicked in the back, then hit upside the head with the butt of a gun.”  Blankness.  Waking up in the hospital, she overhears a nurse complaining “they don’t have enough doctors.”  She later finds out that a pregnant friend of hers was kicked in the stomach, terminating the pregnancy and a teacher stomped to death.  Two of the many attacks made that day.  The guards think they won but they’re wrong.  Ingram checks out of the hospital and returns to the campaign.

Forty-three years later, Ingram now lives in a neighborhood that back in 1968 she wasn’t allowed to even enter.  Segregation has dispersed; however, there is still racism, still disrespect and worse ignorance.  She wonders if kids today realize how hard generations before them had to fight just so they could be where they are now.  She doesn’t expect them to understand the full impact the Civil Rights movement had but appreciate it?  Yes.  Let them hear her story, be grateful it wasn’t them and be eager to want more for their future kids as their parents wanted for them.

Featured in By U Magazine as Amanda Williford